This changes everything - Autodocumenting Workbooks

Your Workbooks can document themselves, now that programmatically creating and injecting Dashboards that document Workbooks into them is a reality. And it's free.

Consider the Regional Sample Workbook. It has six separate vizzes, but one easily can't tell whether any of them is a Dashboard without visually inspecting it. Nor can we see which Worksheets a Dashboard includes without opening it, and there's no way to tell how all the Dashboards relate to all the Worksheets, or the Worksheets to the Data Sources they access.

Imagine, if you please, what it would look like if there was a way to have the Workbook -> Dashboards -> Worksheets -> Data Sources relationships teased out of the Workbook, rendered graphically, and then added back into the Workbook as a self-documenting Dashboard.

Would you like that? Would it be handy? Useful? Maybe? Until now, this sort of thing has been difficult, awkward, and manually intensive. If it was doable at all.

Not any longer. It's now simple and straightforward, with a minimum of fuss, for one workbook, or a whole boatload of them.


with the map of its Dashboards, Worksheets, and Data Sources automatically generated and injected into it.

Adding documentation to Workbooks, where it really matters, has always been a manual, laborious process, with so much friction that it hasn't been feasible at scale. No more. now has the ability to inject dashboards into existing dashboards automatically. Coupled with its existing abilities to generate useful content about Workbooks, this opens entire new horizons for enriching Workbooks with surprisingly little effort.

The simple version: run a simple Ruby script in a directory containing Workbooks to be documented, and the Workbook(s) are documented with the desired content; in this case the D->W->DS maps for each.

The code is available on GitHub here.
Not much to it, is there?
Tableau Tools does the work, needing only a little glue code to compose the specific functionality. 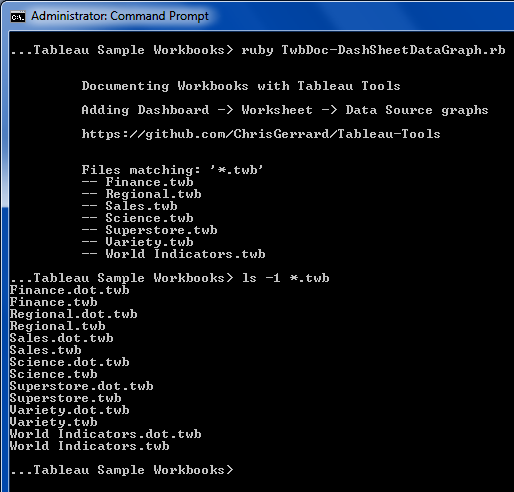 As the code runs it picks up all the *.twb files in the directory and processes each in turn.

Each file has its D->W->DS map built with:

The D->W->DS map image file is added to a Dashboard which is then injected into the Workbook with:

The Workbook is written out, as a copy with '.dot' added to its name with:

There's no technical reason to create a new copy of the Workbook, and in a production environment the Workbooks are mostly documented in place, i.e. keeping their own names.


is required, and is declared as such via "require 'twb'", the first executable (non-comment) line.
The gem is installable via "...> gem install twb", which assumes that "gem " is installed, which should have happened when Ruby was installed.

(post-publishing) note:
The correct gem version is 0.3.2 (as of this writing) – there was a glitch in the gem publishing that I didn't catch at the time of the original post resulting in an obsolete version of it being installed.
Thanks to Philip, Vishwanath, and Matthew for reporting this.


Nokogiri is an XML and HTML parsing gem that's used by the Twb gem. If it's not installed the 'require' statement in Twb will fail.
Nokogiri is installable thus:

note:
Nokogiri is sensitive to the Ruby version being used.
I'm using Ruby 1.9.3, mostly because: it's stable; suitable for my purposes; inertia; and Nokogiri didn't work with 2.x Ruby in the limited testing I did.
There's some documentation online about Nokogiri and Ruby 2.x but I've not had the time to puzzle out how to get them to play nice together.


The diagrams are created using Graphviz - open source graphing software, which can be downloaded and installed from here.

Graphviz location In order for the graphs to be rendered, Graphviz needs to be available for use by the Twb Twb::Util::DotFileRenderer object, which assumes the default Graphviz installation: 'C:\tech\graphviz\Graphviz2.38\bin\dot.exe'.
'dot.exe' is the Graphviz program that renders this particular graph type—there are many other types, each with their specific rendering program.

If Graphviz is installed into another directory, it can be communicated to the Twb rendered by adding the following line to the code (new line bold):

With the Workbook injecting nut cracked, there's no end to the things that can be done. Whatever can be thought up can be created and added to your Workbooks.

Workbook autodocumenting relies upon Tableau Tools' ability to modify and write Workbooks. This core feature makes it possible to compose functionality to accomplish pretty much anything you could want to do with and to your Workbooks. The door is open, the future beckons, and it going to be a fun ride.

Tableau Tools is open source software for interrogating and manipulating Tableau Workbooks and other artifacts. It has two main parts as of this writing: