To those of you who submit comments with zero content other than soliciting for your Tableau training, consulting, or other commercial purposes: you might as well stop.

Your comments will not be published.

I find it offensive that you're spamming the comments, contributing nothing to the topic at hand but looking to advertise your wares.

It offends me personally in that I need to spend time attending to your crass, pushy, rudeness.

It offends those of us who have put in the time, energy, and effort to become competent professionals. Your pushing the idea that simply taking a short Tableau training course, of dubious quality, is enough to get someone to pay you to work with it is at best naive, misleading, and reflective of the race to the bottom that values a smear of exposure to real competence.

Examples of comments I will not publish:

great post i read from start to end its awesome, keep on writing more about TABLEAU. we are one of the leading TABLEAU online trainers.. Visit - http://[spammer 1].in/

your blog is such a wonderful and nice library which filled with lot of technical stuff please share with us http://www.[spammer 3].com/tableau-training.html

This is a Good blog. Thank you for your very useful information. I appreciate that you looked it up to share with us all!.... Tableau online training on

I've been beating the drum for improvements to Tableau's dashboards ever since they were introduced. As a way to get more than one worksheet into the same visual space they were adequate, and they still work OK/tolerably/nottoobad/betterthannothing, etc. for those situations where you only want to double-click 2, 3, or 4 worksheets and have Tableau put them into a grid-based layout.

But this isn't good enough.

Over the years I've been using Tableau there's been far too much time consumed with fiddling, faking, fooling, and futzing around with dashboards. Time that takes away from the real value of helping people discover, understand, and communicate useful and valuable information in the data that matters to them.

Yes, Tableau has made improvements to Dashboards and dashboard creation and maintenance. And some of these are really welcome, as far as they go. For example, the introduction of the Layout control in the Dashboard Window was a half-quantum leap forward. For the first time we could see, without use of external tools, how the elements in a Dashboard related structurally to one another. But as good as it was, as much a leap, it was still only a half-step forward: the Layout control is so small, and it's selection management abilities so poor, that using it is an exercise in multi-click hell. And it's still easier to get a comprehensive view of Dashboard contents with external tools.

It was at this point of describing my frustrations with a colleague who was relatively new to Tableau, and didn't have any experience in more sophisticated tools, that she said, in effect: "well, I don't see what's wrong with it, so why don't you show me?"

Hence the following diagram. I created a simple, two-sheet dashboard and used it to illustrate some of the problems that jumped out. It's in no way comprehensive—I tried to keep it relatively simple. 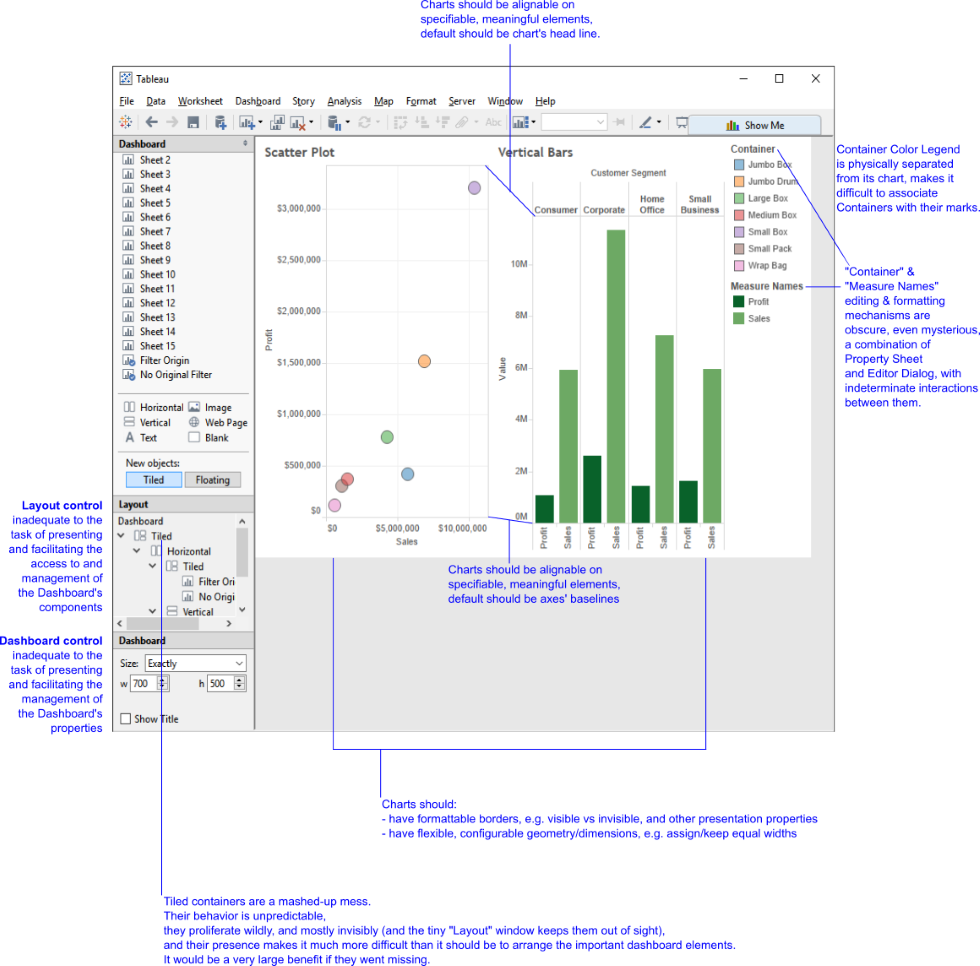 The Tableau Public published version of this workbook is here.

A concrete example. Have you ever been wrestling with a dashboard, trying to get things nicely organized and arranged, only to have Tableau seemingly go insane, moving things around that you haven't touched, making it difficult to place and resize things that only a moment ago were all nice and tidy? The following example shows one of the things that can contribute to the chaos.

Start with a newly created dashboard. 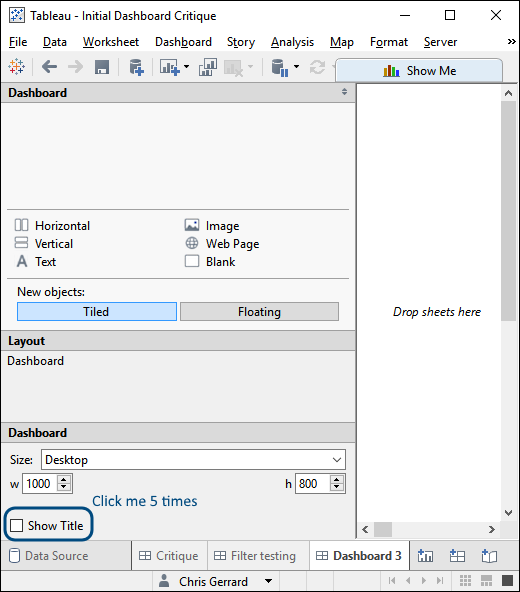 After all the Title Showing and Unshowing you should see that Tableau has gone ahead and created this container structure for you.

This is bad. But it gets worse—once a Dashboard is populated with actual (human) content Tableau will insert containers as you, the dashboard author, do your authoring. This can make for extremely messy situations. 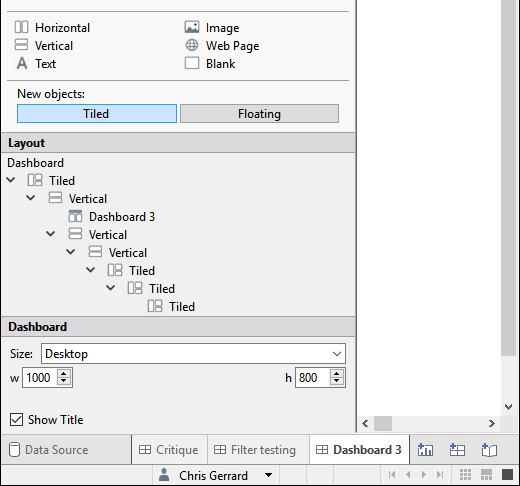