This session delves into the workings behind the solution to this Tableau Community request for assistance: Showing maximum and minimum with a calculated moving average. Please refer to the Tableau Community posting for the full details.

In the post the person asking for help explained that she was looking to have a chart like this: 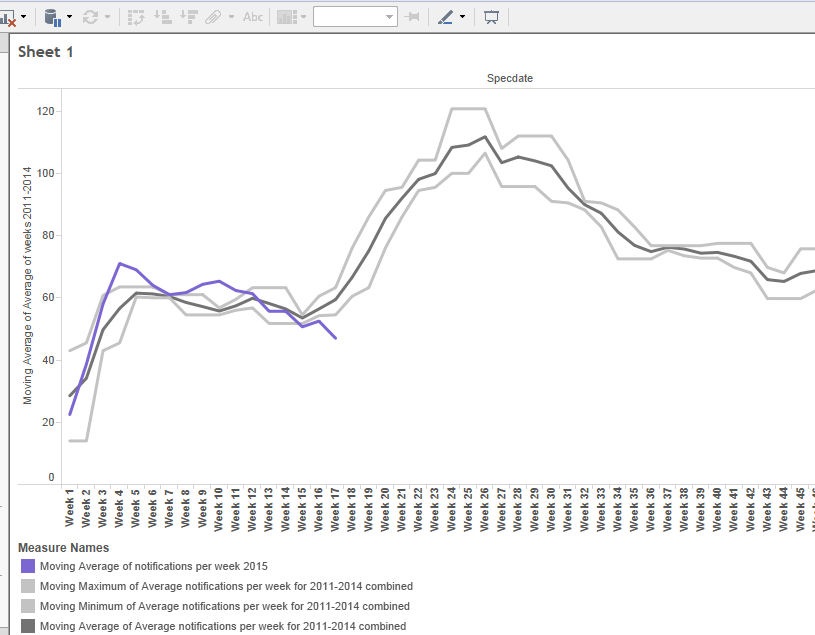 and described her goal thus:

One of Tableau's Technical Support Specialists—community page here, provided a workbook containing a solution; it's attached to the original post. She also provided a step-by-step recipe for building the solution worksheet. Cosmetic adjustments to the solution to make it easier to identify and track the Tableau elements have been made. 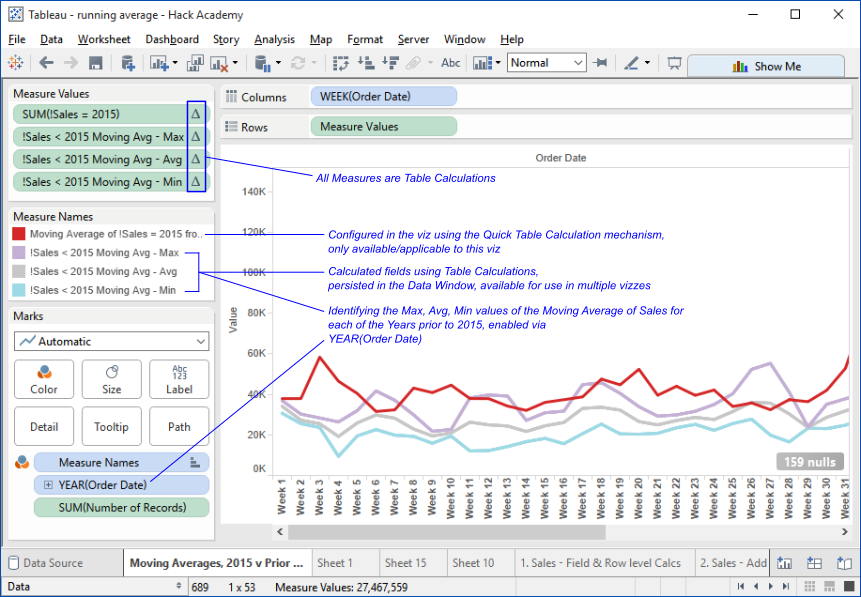 This post expands upon the solution by looking behind the curtain, showing the Tableau mechanisms employed—what they do and how they work. It does this by providing a Tableau workbook, an annotated set of diagrams showing how the worksheets' parts relate to one another, and explanatory information. 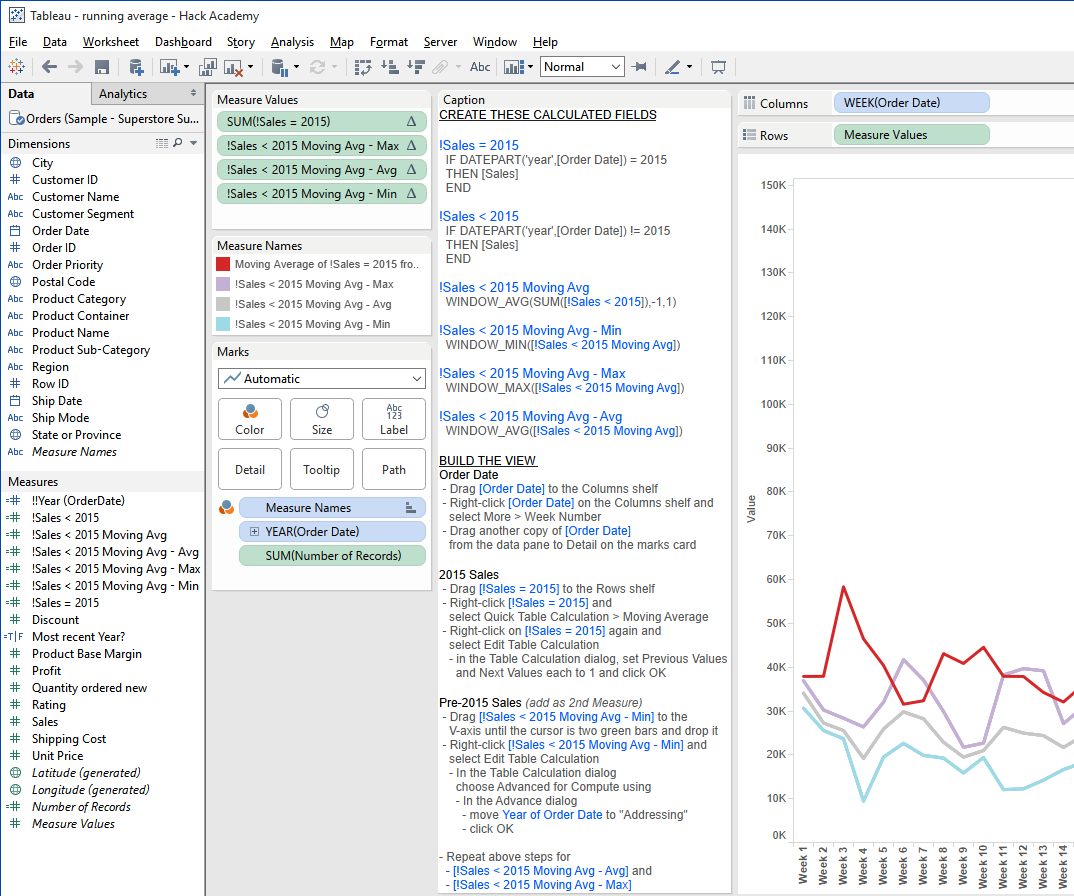 The worksheet's caption lays out the steps for generating the desired visualization. This is helpful in getting to the solution, but doesn't surface the Tableau mechanisms involved.
The rest of this post lays out the Tableau mechanisms, how they work, and by extension how they can be understood and assimilated so they can become tools in one's Tableau toolbox, available for use when the needs and opportunities arise. 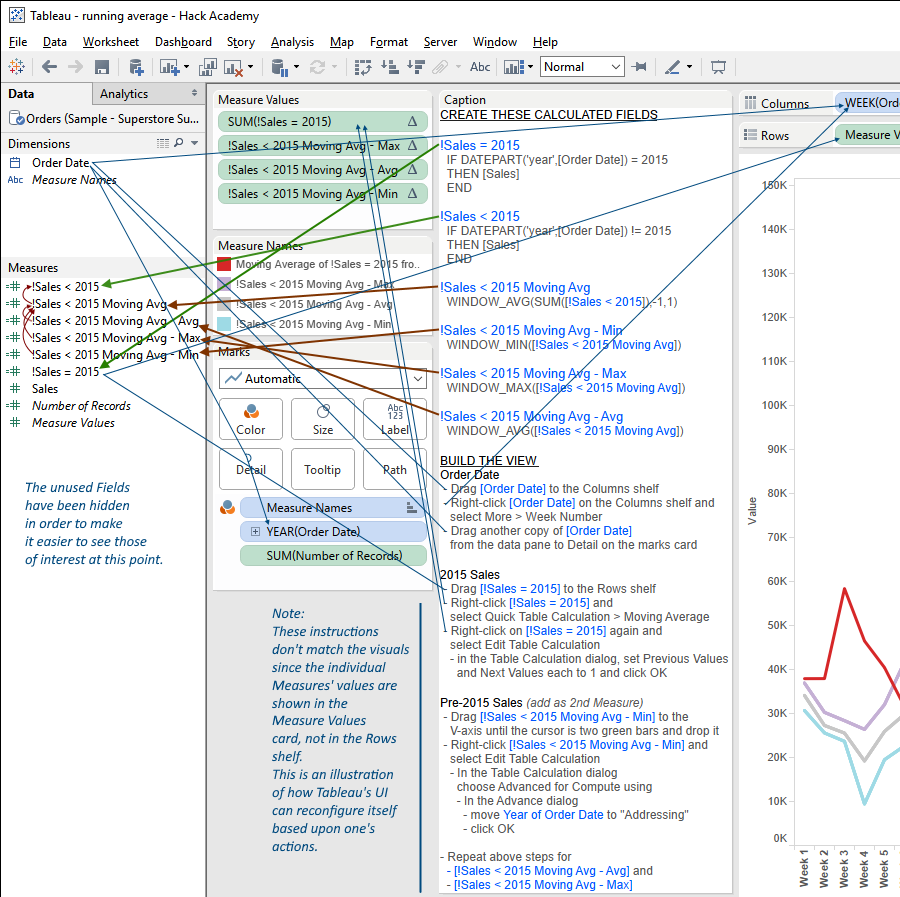 In this diagram the arrows indicate the instructions' targets and the effects of the recipe's steps.
– The green arrows indicate record-level calculated fields
– The red arrows indicate Tableau Calculation fields
– The thin blue lines show how fields are moved
The first thing that jumps out is just how fiendishly complicated this is. Even though less than half of the instructions have been annotated the number and complexity of the relationships is almost overwhelming. In order to achieve analytical results like this, the analyst must first be able to understand this complexity well enough to be able to generate from it the specific desired effects. One of Tableau's deficiencies is that all of this mastering and managing this complexity is left up to the analyst, i.e. Tableau provides virtually nothing in the way of surfacing the parts and their relationships in any way that reveals their relationships in a way that allows for easy comprehension and manipulation.
Once the instructions reach the "2015 Sales" step the diagram doesn't show the Measures in the location the recipe indicates. Instead of them being on the Rows shelf (where the recipe puts !Sales = 2015) they're on the Measure Values card. This is because once there are multiple Measures in play, organized in this manner, they're configured via the Measure Values card and the Measure Names and Measure Values pills. This is one of the things that makes it difficult for people new to Tableau to puzzle out what the parts are and how they work and interact.

The following workbook is an implementation of the Recipe.

Although the Public Workbook above implements the solution and is annotated with descriptive information it doesn't go very deep in surfacing and explaining the Tableau mechanisms being taken advantage of—how they work and deliver the results we're looking to achieve. This section lifts Tableau's skirts, revealing the behind the scenes goings on.


One of the things that can be difficult to wrap one's head around is Tableau's mechanisms for accessing and processing data, from the underlying data source through to the final presentation. Tableau processes data in (largely) sequential stages, each operating upon the its predecessor's data and performing some operations upon it. This solution employs multiple stages; this section lays out their basics, illustrating how they're employed to good effect.

Tableau applies different data processes and operations at different stages—in general, corresponding to the different 'kind' of things that are present in the UI. These stages are largely invisible to the casual user, and their presence can be difficult to detect, but understanding them is critical to being able to understand how Tableau works well enough to generate solutions to novel situations.


At the core of the solution is the distinction between data structure and presentation. In this situation there are, in effect, two data layers in play; we represent the stages as layers in order to help visualize them.

This Workbook contains a series of Worksheets that demonstrate these Tableau mechanisms.

This Worksheets are shown below, along with descriptions of what's going on.

The fields used to illustrate the data processing: 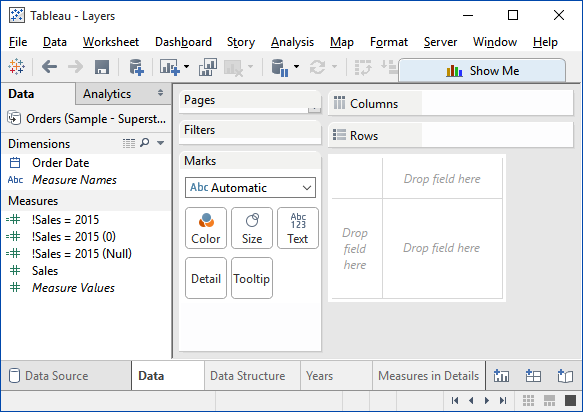 The major difference between the fields is whether they evaluate to Null or 0 (zero) when Order Date's Year is not 2015. The first two fields evaluate to Null—the first implicitly, the second explicitly. The third evaluates to 0.

This is the distinction upon which the solution's deep functionality depends. Recall that Tableau only presents non-Null data; this solution takes advantage of this by selectively constructing the Null and non-Null presentation Measures we need.

This viz shows the basic data structure needed to support our goal of comparing Weekly Moving Averages for each of the Order Date Years:

Tableau shows Marks for each combination of Order Date Year and Week for which there's data, in this case the Marks are squares. This is one of Tableau's magic abilities that really adds tremendous value in assisting the analytical process (and in many cases is itself a very valuable diagnostic tool). 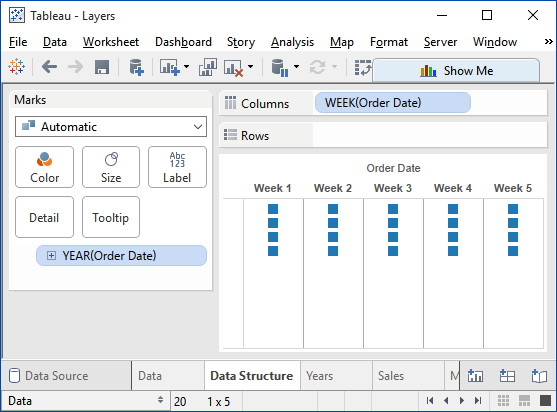 Right-clicking Year (Order Date) in the Marks card and selecting "Label" tells Tableau to show the Year for each Mark.

This confirms the data structure, and is one of the basic steps in building complex visualizations. 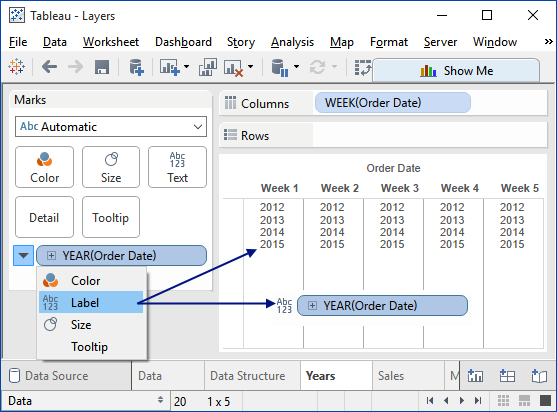 In this viz Sales has been added to the Marks card—Tableau applies its default SUM aggregation and configured to be used as the Marks' labels.

As shown, Tableau uses the Sales sum for each Year and Week as the label.
This can be confirmed to show the accurate values, if desired, via alternate analyses.

Note that the viz shows the actual Year & Week Tales totals, not the Sales compared to the same Week in 2015. 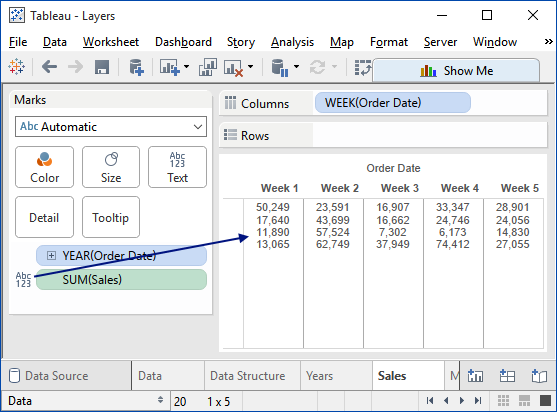 In this viz Sales has been replaced on the Marks card by the three Measures shown.

Our objective is to see how Tableau presents each of them vis-a-vis the base data structure. 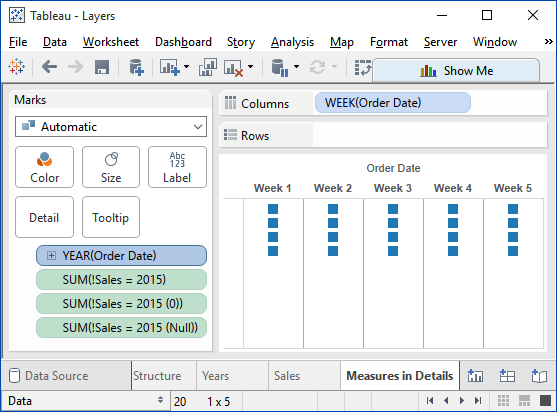 SUM(!Sales = 2015) has been used as the Marks' label. As we can clearly see, there's only one Mark presented for each Week. One may wonder: why is only one Mark shown for each week when we know from above that there are four Years with Sales data for each?

In this case, Tableau is only presenting the Marks for the non-Null measures in each Year/Week cell, because the !Sales = 2015 calculation
IF DATEPART('year',[Order Date])=2015
THEN [Sales]
END
results in Null values for each Year other than 2015, so there's nothing for Tableau to present.

One potential source of confusion is that the "Null if Year <> 2015" result for the !Sales = 2015 calculation is implicit, i.e. Tableau provides the Null result by default in the absence of a positive assignment of a value when the Year is not 2015. This viz has the same outcome as the one above.

The difference is that the calculation for
IF DATEPART('year',[Order Date])=2015
THEN [Sales]
ELSE NULL
END
explicitly assigns NULL (also Null) to the non-2015 Years' values.

Using an explicit NULL assignment is advised as it minimizes the cognitive burden on whomever needs to interpret the calculation in the future. 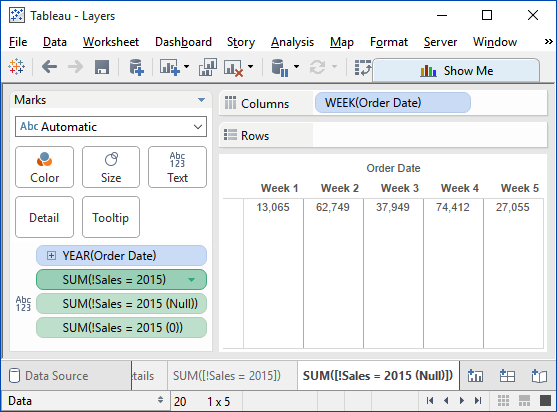 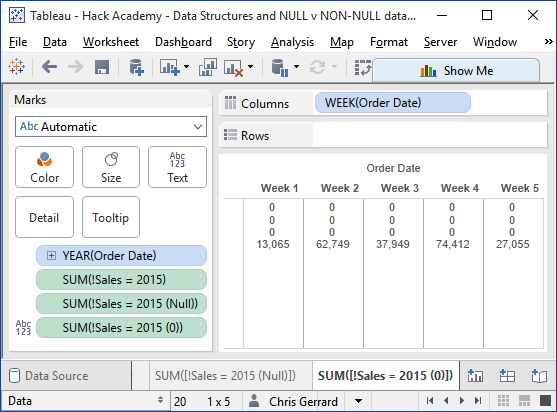 From this point we're going to be building the viz from the bottom up, showing how the constituent parts operate and interact with each other.


First up: making sure that the Sales calculations for Sales for pre-2015 and 2015 are correct.

The calculations are correct—they sum up to the total of all Sales.

The moving average for 2015 Sales is generated by configuring the SUM(!Sales = 2015) measure as a Quick Table Calculation in the viz. 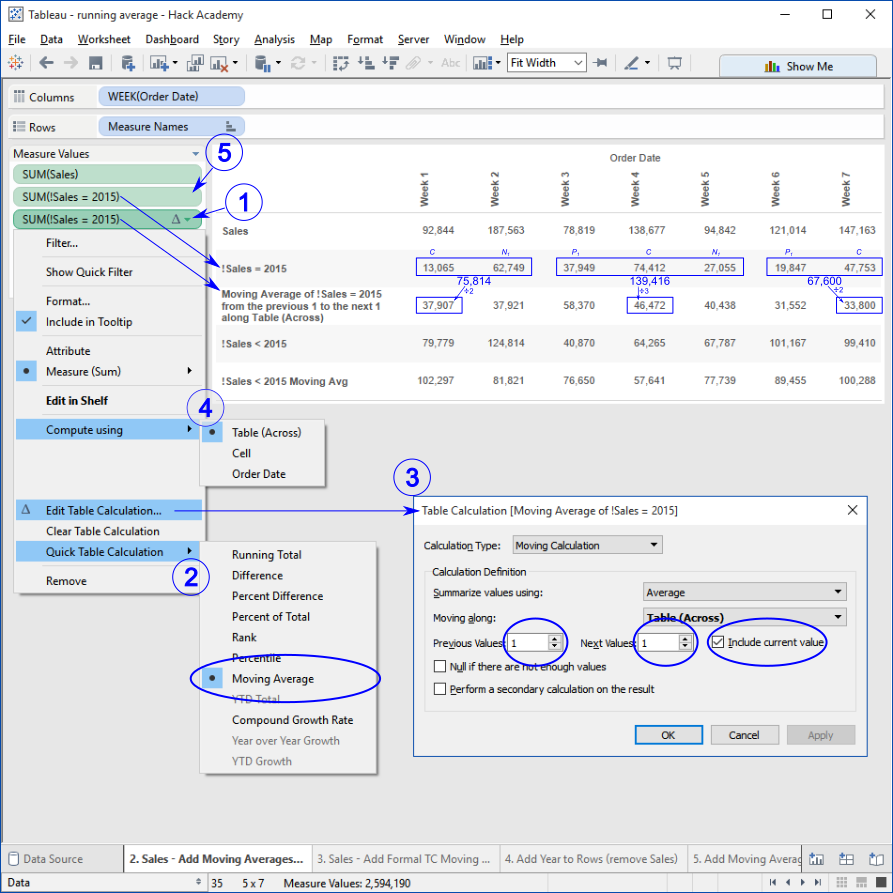 Please note: this is implemented using a persistent Calculated field coded as a Table Calculation: !Sales < 2015 Moving Avg
This is a different approach than using the in-viz configuration of the 2015 Sales shown above. There are differences in the two approaches, some obvious, some subtle. 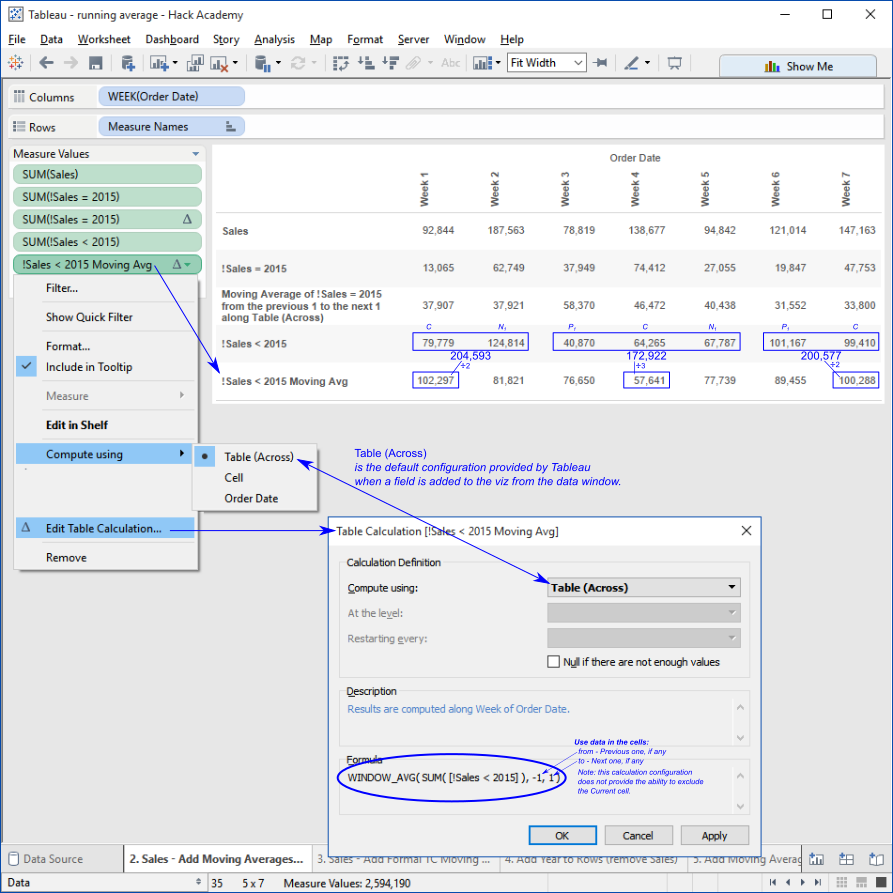 When Tableau puts !Sales < 2015 Moving Avg in the viz it applies the default configuration as shown. In this viz the use of Table (Across), as shown in both the Table Calculation dialog and the field's 'Compute using' submenu, provides the desired functionality, i.e. averaging the appropriate !Sales < 2015 values, based upon the field's formula:
WINDOW_AVG(SUM([!Sales < 2015]),-1,1),
resulting in: Note that the Measures are only instantiated for those Years for which they are relevant, i.e. the pre-2015 Measures only have values for the years prior to 2015, and the 2015 Moving Average only has values for 2105.

Having these Year-specific values sets the stage for the next part: identifying the Minimum, Average, and Maximum of the pre-2015 Yearly Moving Averages.

How Tableau accomplishes constructing the Measures for this viz is beyond the scope of this post, and it can get complicated. 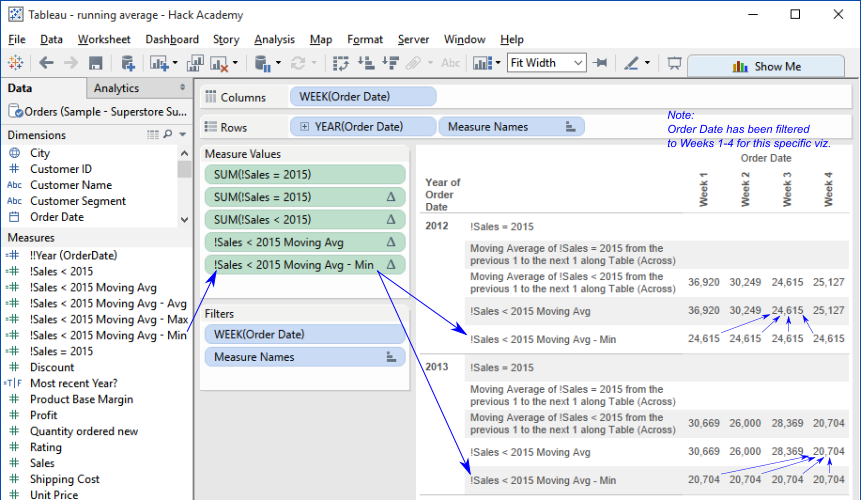 Drag !Sales < 2015 Moving Avg - Min from the Data window to the Measure Values shelf as shown. 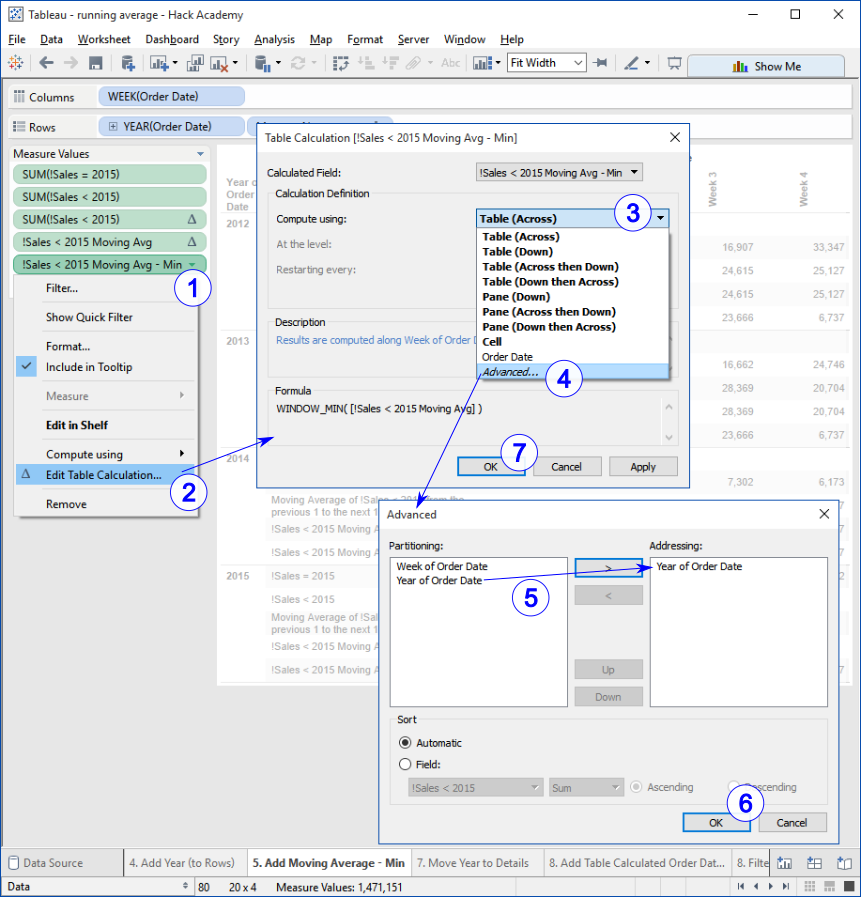