Arrrrggggghhhhh - Dang it! I didn't want it saved -there-!

My client is in transition from Tableau 7 to Tableau 8, so I make it a practice when I open a workbook with Tv8 and get this message:

I just opened a Tv7 workbook and saved it with the "Tv8" convention via "File | Save As...", almost as a reflex.
Guess where it was saved.
Give up?
I can't afford to.
Tableau saved it somewhere, but not in the folder from whence it was opened. I just looked, and it's not there.

I have to clean up the mess.

This is an example of where Tableau, in its flawed implementation, makes life much more difficult than it should be. Tracking files' home locations and using that as the default is such a simple thing, but its absence can be such a big bother and an interruption of the analytical flow.

Posted by Chris Gerrard at 10:52 AM No comments:

Working with a lot of different Workbooks is interesting, challenging, satisfying, and on good days fun.

But it's not without its challenges. In a typical day I work with enough workbooks, from enough different places, to make anything that gets in the way of me getting to the one I need, when I need it, aggravating. Particularly when a client comes into the office with some thoughts on what they want or need next for their presentation; the one that's about to happen.

Cutting to the chase: Tableau's limit of nine Workbooks in its File menu is limiting, e.g.: 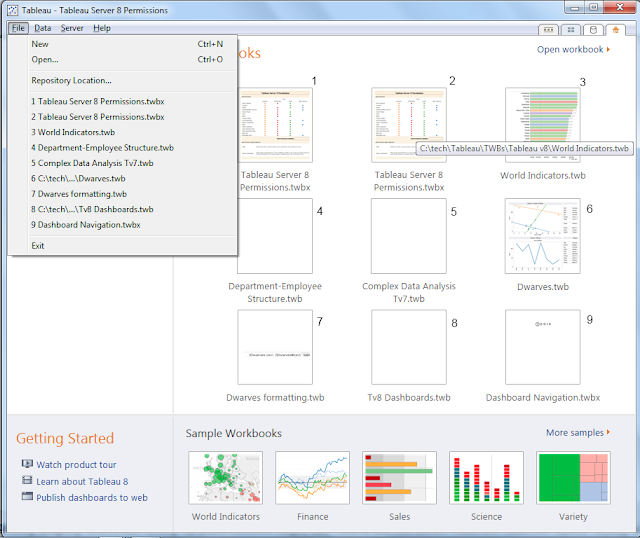 The screen cap above was taken on my trusty little laptop. Its screen isn't very large, but it's plenty large enough to accommodate at least twice as many recent file names as the current limit of nine. The file menu has plenty of room to grow downward, and the home page could certainly adjust the thumbnails and names to fit in that many, or more.

The new, improved, most recent file list should also be provided with mechanisms to help the user choose which file they're really after. In my example above, the first two files have the same name – they're separate working copies of one I was working on. The home page tooltip is helpful, but only minimally. It doesn't contain any information except the file's directory and name (and I'm happy for that), but it would be really if it provided more, and more interactive, information to help me choose which file I want. The file's size, last modification date and time, #s of dashboards, worksheets, and data sources would be nice. Something, say, like a mini-sheet of files that would make it much easier and clearer to see what I've been working on and when. And while we're at it, why not throw in a filter that would let me zero in on that one special file; Tableau Server has a basic filtering ability in its content presentations, why shouldn't Tableau Desktop? 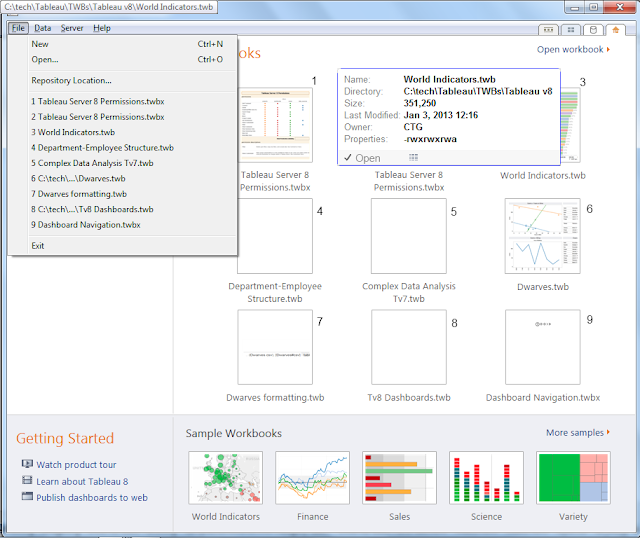 Note that the "World Indicators.twb" tooltip will be activated from the "File" menu as well as from the home page.
There's no reason for Tableau to restrict itself to the obsolete Microsoft notions of what the proper menu structure and functionality for computer programs should be.

While we're on the subject, this is only one more example of information about itself that Tableau should surface as data.

Posted by Chris Gerrard at 9:30 PM No comments:

The need: workbook organization and management.

The problem: Tableau offers very little in the way of help, and even provides bad information.

During the course of a typical day I work with many workbooks – as of this writing there are 932 TWBs and TWBXs in 106 folders in my working file system. Some of them are my clients', some are my own, some are Tableau samples, and the rest come from places I've forgotten about. Keeping them organized, each in its appropriate folder, is difficult. Looking for one I'm interested in can be a chore when I can't recall just where it lives.

I'm accustomed to applications that track the files I'm working on. They keep track of where the file was loaded from, and are happy to let me know, usually via the "File | Save As" option, or an equivalent.

Tableau Desktop, on the other hand, doesn't provide this information. In many, many cases, once you open a Workbook and try to find out where Tableau loaded it from, you're out of luck—Tableau won't reliably show you this information (unless you know where to look). What's worse, Tableau will lie to you, showing you a location from whence the Workbook did NOT come. This is extremely frustrating, particularly when one's working with a number of workbooks simultaneously and needs to keep track where each of them came from. 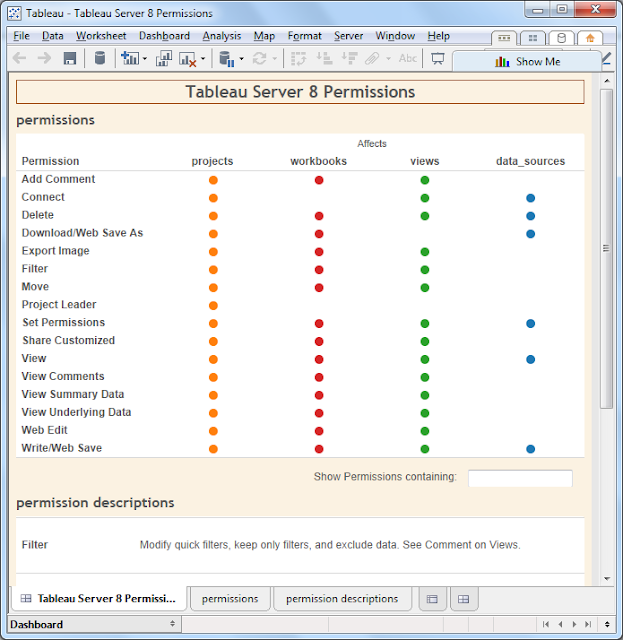 After working awhile, I think to myself: "Hmmm, I wonder which directory this version of the Workbook came from" and try the trusty old
"File | Save As..." option, at which point Tableau obliging shows me this dialog: 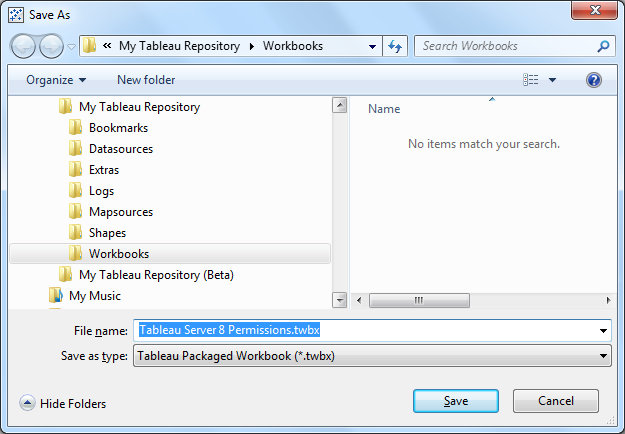 Well, that's clearly not right. I certainly didn't pick up the Workbook from the Tableau Repository.

So I try another tack, hoping to trick Tableau into showing me the location with the "File | Open..." menu option, and Tableau presents me with this: 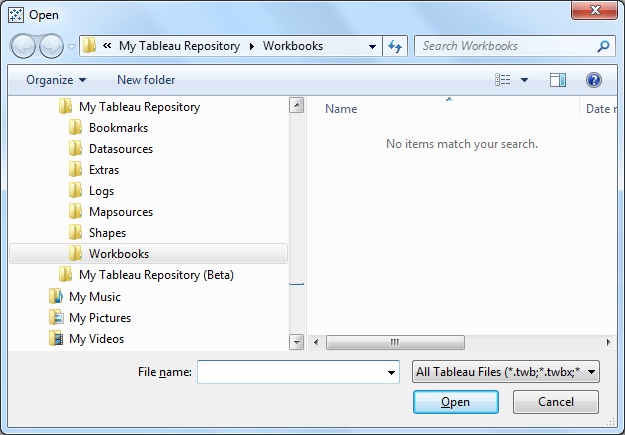 Tableau has once again shown me the Tableau Repository, and it's still not this Workbook's home.

Why doesn't Tableau follow the standard convention and track the home directory of the Workbook it's currently holding? There's a very good reason for this—being—the convention, and I cannot think of a rational explanation for Tableau's idiosyncratic behavior.

There are times when it's good to break from convention – Tableau is at its core a departure from the once-standard approach to data analysis (although not as radical and absolutely innovative a departure as commonly thought). This isn't one of those times.

Tableau's default behavior should be to track the home location of every file it accesses and offer that location up to the user when asked.

There are some circumstance when the user might wish for Tableau to behave differently, e.g. when consolidating a bunch of Workbooks into a common location. This could be accomplished by providing a mechanism for establishing a "default" location that could be invoked by the user when desired. But that's an edge case, should not be the out-of-the-box default behavior—and it opens the door for all of the Tableau configurations that the community has been clamoring for, because once a mechanism is in place for configuring one option it;s available for configuring others.

I know that hovering on the file's icon in the home page will show me a tooltip with the file's home directory in it. And this is in itself a good thing. But it's one of those side effect situations where one needs to take advantage of an auxiliary feature to get something that should be front and center. Tableau is full of things like this, each of them adding its own little bit of friction.

Even the home page's tooltip is much less functional than it should be. You can't copy its contents, which would be really handy, and it doesn't show anything about the file other than its directory and name.

Is there a good reason to limit to ten the number of Site names in the "Select Site" page in the Tableau Server log in process? 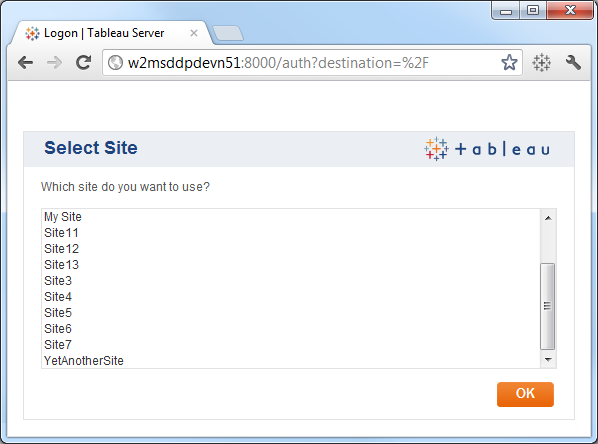 Or was this one of those things left up to whomever put the page together, and to whom ten felt like a nice round number? It has that feel to it. Tableau is full of these things, that seem to have been implemented in isolation without the guidance of a real set of unifying design principles that provide a coherent paradigm for the overall product.

I am admittedly sensitive to things of this nature, having suffered the annoyance of being addressed as "Christophe" far too many times because of the once-standard ten characters in names data processing limit.

As the Tableau Server administrator for a very large, very diverse organization with many Sites, I run into the silliness of needing to scroll the Sites list up and down enough to make we want to have a nice quiet chat with whomever is responsible for this feature and explain why it's inadequate.

And while we're on the subject, we figured out good usability design patterns for helping people find the item they're looking for in a list better than 20 years ago. There are plenty of candidates that would be an improvement here, why not use one? Taking it a step further, Tableau should settle on an approach for this functionality and use it consistently across the product line – this would be a huge benefit in helping people actually use Tableau rather than trying to puzzle out its mysteries.

Posted by Chris Gerrard at 5:51 PM No comments:

A Tableau Server Site Administrator has great power within his or her Site. In the wrong hands this power can cause great harm.

It's not a good idea to assign Site Administrator privileges other than to specific, responsible, knowledgeable Users who know what they're doing and can be trusted to do as little harm as possible.

Assigning Site Administrator privileges should be a deliberate conscious act, one with a higher burden of awareness and positive confirmation than is present in the simple act of registering an ordinary Interactor or Viewer. It would be very, very helpful if Tableau Server provided a secondary "are you sure" prompt in response to Site Administrator assignment, much like destructive operations like deleting worksheets require. (oh, wait, Tableau Desktop 8 doesn't do this any more - but that's another post)

It's a problem, then, that Tableau Server sometimes provide the opportunity for Site Administratorship to be assigned to a new User as a side effect of adding that User to a Site.

This is very bad.

In an Active Directory authentication enabled Tableau Server installation, when adding a new User (Interactor only) to a Site the current admin mis-identifies the User. Tableau Server, unable to validate the user against Active Directory, returns an error message to that effect and provides the admin the opportunity to correct the User's AD name and resubmit. Upon doing so, with the name now correct, Tableau Server goes ahead and registers the User.

Only now the User is a Site Administrator.

How can this be? The admin did nothing positive to cause this to happen.

The fault is Tableau Server's. Upon presenting the "could not be added" error message to the admin, Tableau Server has, for reasons unknown, toggled the "Site Administrator" check box to active. This selection, being outside the admin's attention area, has a very high likelihood of being overlooked, thus causing the inadvertent assignment of Site Administrator to the new User.

Anticipating the "but the admin should be paying attention" claim that there's nothing really wrong here: sorry, but that's not a valid position.

Here are the screen shots showing the events. 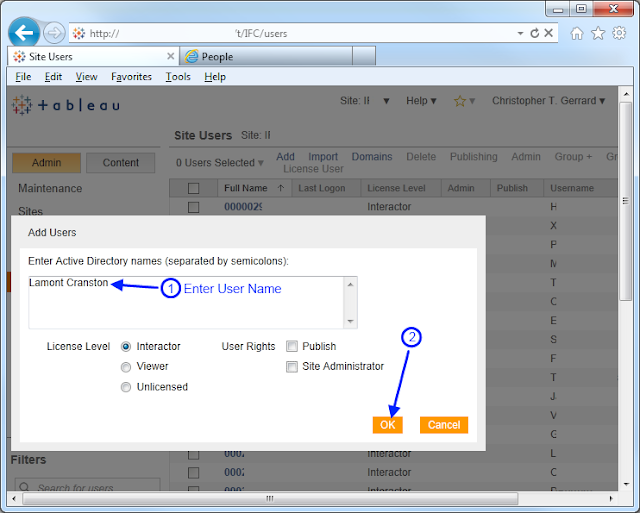 User Not Added - Name Not Legitimate 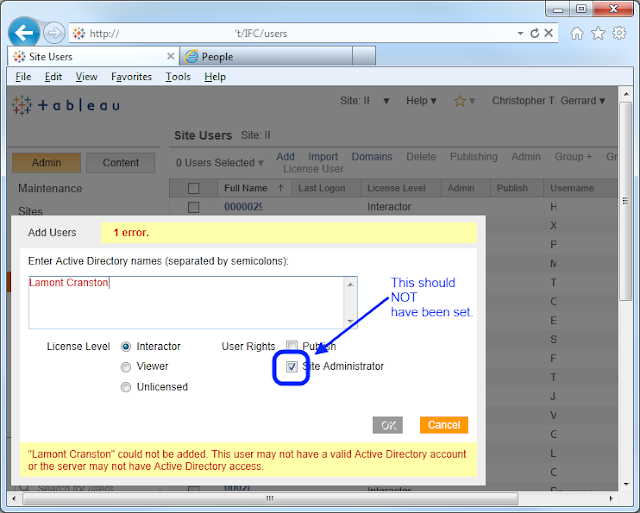 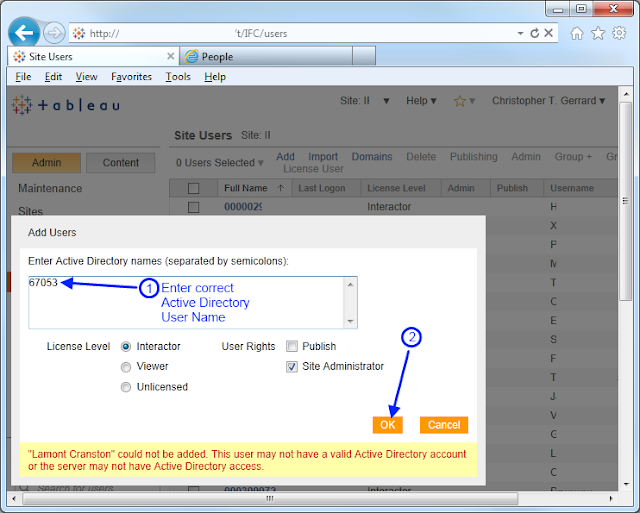 User Added to Site as Site Admin - not as intended 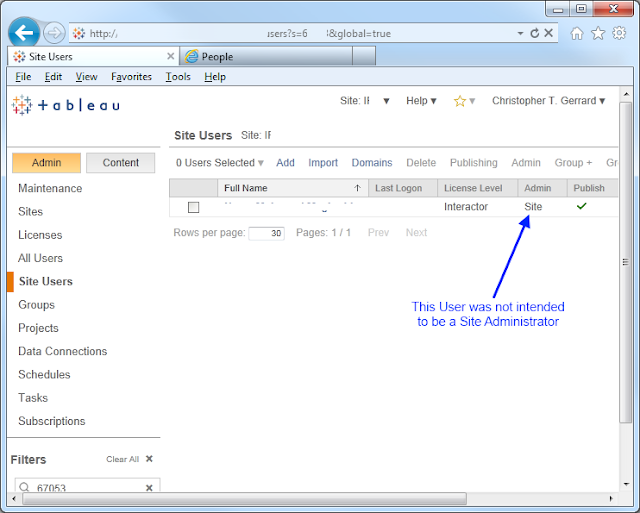 Posted by Chris Gerrard at 5:26 PM No comments:

Here's an initial dashboard showing the Tableau Server 8 permissions. There are some additions from TS 7 to enable Web authoring.

As usual, the descriptions are truncated to the first 255 characters, an artifact of Tableau's use of the MS Jet engine for accessing Excel and CSV data. I'm planning on creating a proper Tableau Extract for the data using the new extract API, but it seemed prudent to not hold this back for that.