Tableau workbooks tend to multiply, and their data connections in them multiply apace.

Changing the properties for a data connection or two isn't difficult, nor is it terribly burdensome. But it's a mechanical process, and after making the same change through the UI more than a couple or few times becomes boring, and when there's more than a few Workbooks it's really difficult to keep track of all the connections that need to be changed, those that have been, and those that have not yet been.

Here's a way to change the database server for a whole collection of Workbooks all at once.

Simple and easy, and in keeping with the small-apps approach, I've created a small Ruby app that scans all the Workbooks in a directory, locates those data connections with a server specified by name, and change the servers' names to a new one.

How it works — the "before" picture:

In the top section of the image below is a list of the Workbooks in the current directory. The bottom section shows the server names of the various database connections in these Workbooks.

For this post, we're going to change the "Ora.development.env.server" server names to "Ora.production.env.server" 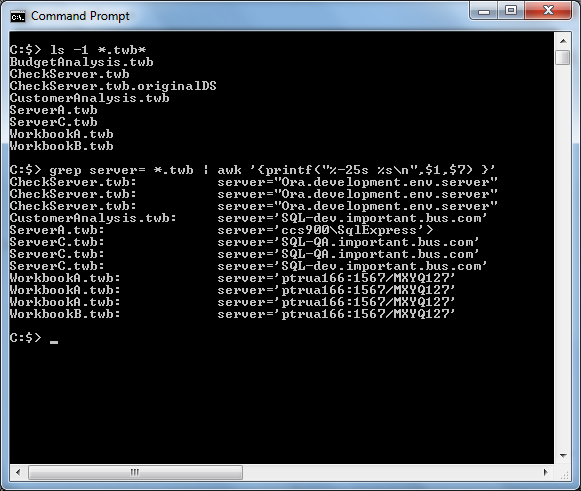 How it works — making the changes:

In the first section of the image below I've executed the Ruby script: TTC_cds.rb. It first asks if I want to change database server names, and upon getting the answer "yes" asks for the existing (old) server name, and the new name to change it to.

Some important points — TTC_cds.rb will:

The middle and bottom sections below correspond to the image sections above. We see that the server names have been changed according to our specifications. 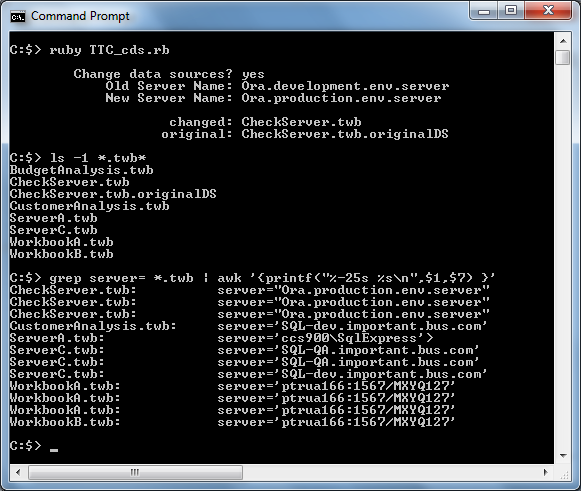 A Tableau viz of the changed server names

OK, it's just plain old Ruby code, but it works some magic.

No Workbooks are harmed during the database server renaming.

Your workbooks with server name changes are safely backed up.

TTC_cds.rb works fine with the limited testing it's been through, but it's definitely not bulletproof and hardened. It's entirely possible that it won't work on your Workbooks, or somehow mangles them. So use carefully. Always back up your Workbooks, or only run TTC_cds.rb against copies. .

I hope it works for you, but make no guarantees. If you do use it and make improvements I hope that you'll post them back here as comments so I can learn from them, and hopefully other people can benefit from them too.