I get calls all the time from recruiters wanting to know if I'm interested in this or that Tableau job. Most often it involves the opportunity to go and be a Tableau developer somewhere. It's even possible to triangulate which company is moving forward with their Tableau efforts from the three very similar calls I get within a 24 hour period. They go like this:

them: Hello, I'd like to speak to Chris, please.

them: Hello, Chris. My name is Lotso Letters, how are you today.

them: I'm very well Chris thankyouforasking.
Chris, I'm calling because there is an opportunity for a Tableau developer and can I submit you for the position and how little will you work for?

me: To tell the truth, I'm probably not interested, but if it's a truly exceptional opportunity I may be.
What are the particulars?

them: How much is your rate?

them: Let me talk to my manager and see if the client is willing to pay that.

At which point the conversation is essentially dead.

I can appreciate that people are trying to make money off of the commoditization of my profession, and it's been coming for a long time, but it still stings that Tableau is being misused to the degree that it is.

So when I received another missive from someone wanting to know if I was interested in a Tableau developer position, I wrote the following.

Hello {name}. Thanks for your note, but I'm not interested in being a developer of any kind.

I've been doing business data analysis for a long, long time, and I'm firmly convinced that the idea that satisfying business needs for information from data is an activity that ends up with someone developing something someone else thought up in response to someone else's thoughts about what yet another person needs, in the traditional SDLC paradigm, is just flat wrong.

My career started with establishing direct intimate relationships with business people, using 4GLs to create the reports they needed. Without developers (COBOL programmers in those days). I was lucky enough to get to work for the leading 4GL software vendor, for managers who knew that business consulting is more important than technical contracting. We got to go to work every single day and deliver the information people needed without layers and layers of people and technology getting in the way.

That world faded into obscurity with the advent of Big BI, where building massive data cathedrals became the point. But it's coming back, and Tableau is leading way. In Fact, a very good argument can be made that the good world is coming back because of Tableau's leadership in demonstrating that it's possible.

As a Tableau consulting practice manager, and an avid and enthusiastic Tableau devotee since 2006, I get to go to work and help my clients move away from the analysis/design/develop/test/deliver SDLC-based paradigm that at best delivers a very thin slice of the universe of possibilities, and generally does more harm than good. (but it does line the pockets of the traditional Big BI contracting firms who are getting better at "re-purposing" traditional BI people into their clients' organizations as Tableau developers.

Although the world is moving in the right directing of bridging, even eliminating the gap between people and the data they need to understand, there are very powerful, very conservative forces, that are trying to maintain the bad old ways and keep as many thumbs in the pie as possible. To the degree they succeed in impeding, co-opting, blunting, or otherwise diminishing the possibilities that Tableau (and its cousins, including those not yet born) brings, they'll make more money even as they fail deliver nearly the value the organization should be receiving.

If you're clients are interested in truly taking advantage of the full spectrum of opportunities and possibilities Tableau offers I'd be happy to talk to them and see how I can help. Otherwise, thanks again for your note, but I'm not interested in helping companies do the wrong thing.


After years of asking Tableau to implement mechanisms for documenting Workbooks in the Workbooks, and for automated ways to manage Workbook and their contents the wait is over.


to build apps that can access, interrogate, and manipulate Tableau Workbooks in ways that haven't previously been possible. And the technology is free, as in speech and beer.

there have been ways to document your Workbooks, including:

and to manage them, e.g.

TWIS and The Workbook Auditor have been around for a number of years, and provide useful and valuable information about the workbooks they're asked to look at. Andy's Auditor is very polished, with good coverage, and works very well for most people. TWIS is more of working tool that goes pretty deep, uncovering lots of rich detail, e.g. field calculations, and still works well but it's a monolithic Java app. I've taken a different tack, which has led to this post and am not planning on maintaining TWIS.

I'm a bit familiar with Interwork's tools, but haven't had much use for them as I build apps that cover my needs, and can quickly create new ones on demand. And their tools are expensive.


for a number of reasons.

There's a mismatch between the nature of the information in Workbooks and Tableau's structural model of analyzable data.

In building TWIS it became clear that any single app that was able to capture the multitude of two-dimensional slices through Tableau workbooks becomes very, very complex very quickly. Building one app to pull all of the interesting data about workbooks out of the them became the chase of a rapidly receding horizon, a pursuit one person, at least this person, couldn't keep up in the long run.

On top of this, the analyses and documentation generated by these approaches is external to the Tableau Workbooks themselves. As a result, there's a lot of friction in using them — one needs to run the tool and examine the documentation separately from Tableau. This is a suprisingly large hurdle to helping people understand their individual workbooks, which is what most people are concerned with.

Several years ago I began writing simple, straightforward Ruby programs to access, analyze, and manipulate Workbooks according to the specific needs at that time. These were rooted in the experience gained from creating TWIS, proved to be good solutions for those cases TWIS didn't cover. Some of them I've published here, many others I haven't.

After writing lots of these Ruby apps, and writing the same boilerplate code multiple times I decided to create a library that models Workbooks and their components. Being Ruby, it was natural to create this as a Ruby gem, and so Twb, the gem, was born. My hope and ambition is that the Twb gem can and will be used by others to create apps to access, interrogate, and manipulate Workbooks.

– ready for use.
Twb is freely available from RubyGems.org. Just like any other Ruby gem, it's easy to install and start using. Assuming that you have Ruby and RubyGems installed on your computer, installing Twb is this simple (in Windows):

That's about as simple as can be. One of the attractions of using Ruby is its emphasis on making things simple, easy and straightforward, with a minimum of fuss and bother.

Once installed, Twb can be used to make writing useful and valuable apps simple and straightforward. Or at least as simple as what you're trying to do can be—the things one wishes to know about and do with Workbooks are as complex as the information models of the Workbook elements one's interested in, and what one wants to do with them. Twb's ambition is to make these apps easy to create and transparent to use.

At the simple end of the spectrum is a simple app that scans a set of Workbooks and reports the Version and Build information for each. Version and Build are related to the Tableau version last used to save the Workbook. Build is the technical release number that is also available in Tableau's "Help | About" menu option. Version is loosely but not strictly tied to the Tableau version – 8.2, 8.3, 9.0, etc. – I've not puzzled out the real relationship, largely because I've not had the real need to.

This Ruby script is available online from Github here.

When run, the script scans for Workbooks and upon finding some does two things with each:

This is accomplished with only 10 lines of Ruby code, leveraging Twb to handle the heavy Workbook-parsing lifting.

Here's the script in use, in a directory containing the Sample Workbooks from Tableau versions 8.3 and 9.0: 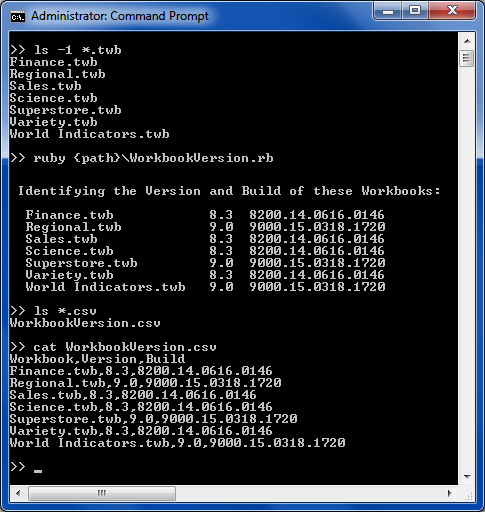 This Tableau Public Dashboard shows a viz of the CSV file generated above.

It's an example of the sort of analysis that can be achieved with TWIS, The Workbook Auditor, etc.

The Twb gem doesn't really do anything new here, but it does make doing exactly the thing you need done easy.

WorkbookVersion.rb can be instructed to scan specific Workbooks by passing the file name pattern on the command line, e.g.:

Running WorkbookVersion.rb in a directory containing all of your Workbooks makes it very easy to see which Tableau versions created how many of them, and which ones, by building a couple of very simple vizzes.

I've already used Twb to create a wide variety of apps, which I'll be publishing them here, and their source code to Github, in future posts. Some of them are brand new, some of them are existing apps re-implemented to take advantage of Twb. I hope they're all useful.

My intention is to create a vibrant ecosystem of tools for managing Tableau workbooks, and hope that it's a fertile ground for the nurturing a community that uses and advances the tools.

Twb and the Tableau Tools will be released as Open Source projects, as soon as I can get the ducks in a row.

No matter what your level of experience with Tableau, Ruby, workbook XML munging, open source projects, etc., the Twb gem and related apps are available for your use, and hopefully contribution. Please feel free to join in.