It's easy to make lots and lots of Tableau workbooks. In fact, they tend to sprout up all over the place. This is a good thing. Tableau is most valuable when it's being thoroughly exercised, when people are putting it through its paces, exploring data, trying this and that, experimenting with approaches and techniques.

On the other hand, this very wonderfulness has its consequences and costs. This post is about one of them, and a solution to the problem that arises. (problem here in the technical sense, without any value judgement)

There are multiple connections to the same data scattered through the workbooks, and there's a business need to make sure that the data's semantics are consistently presented to the workbooks' users via informative comments on the Tableau connections' fields.

This post presents a way to make sure that all of the references to the same field in a set of workbooks have the same comments.

The short version is that it uses a standard Tableau workbook containing the appropriate comments and a Ruby script to apply those comments to the fields in other workbooks. The details follow.

A connection without comments. 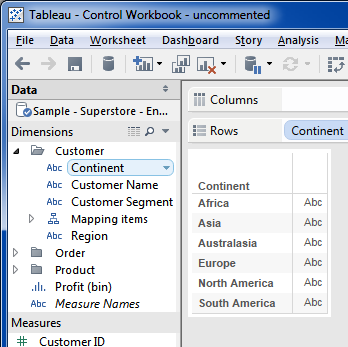 A connection with comments. 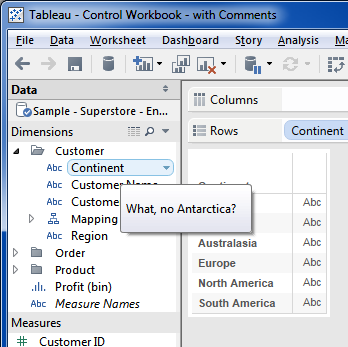 The mouse pointer isn't visible in the screen caps above, but it's hovering over Continent on both cases. The one on the right shows the comment "What, no Antartica?", the one on the left has no comment.

Our goal is to have the comment, and all the fields' comments from the commented connection applied to them in the other workbook. Here's the procedure:

ApplyReferenceComments.rb is inline below and can be copied from there, or you can download it from here. 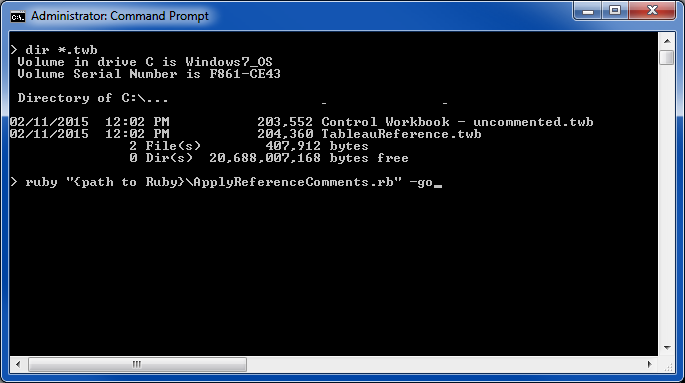 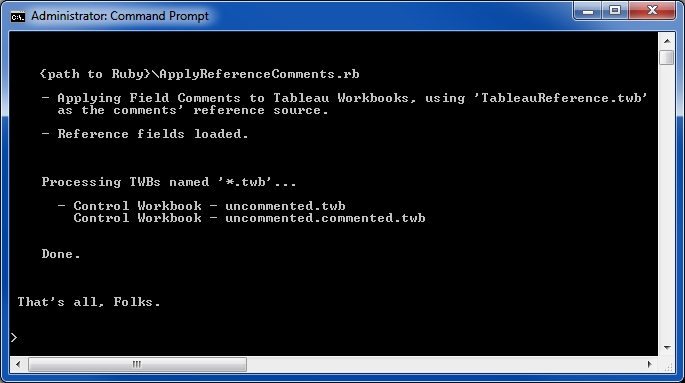 Note that whenever a Workbook is found ApplyReferenceComments.rb lists it, and then if there are any comments added to it the original Workbook is saved with ".commented" appended to its name. This ensures that the original TWB is left unchanged.

A record of the comments that are applied is kept as data in the CSV file "AppliedFieldComments.csv". Here's an image of a Tableau workbook showing the results of the scenario above. 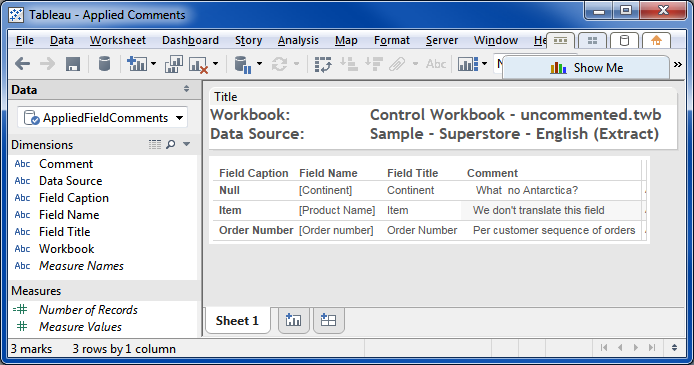 There's only one Workbook and one Data Source, so they're shown in the sheet's title do the sheet can be narrow enough to display the whole worksheet.

This script has worked well for my situation and needs.
It may or may not work as well for you in yours.
There are no guarantees that it will do anything useful.

Rumor has it that Tableau has told one Tableau tools vendor that Workbook XML will not change in any ways to break existing tools and utilities. This would be good, there's been no public commitment to this that I know of and Tableau 9 could break everything.

These utilities evolve fairly rapidly as needs and conditions change. I envourage you to take this code and use it as the basis of your work, and hope that if you do you'll leave a comment and a link to your new stuff. The more tools the community creates the better for all of us.

I'm very interested in hearing about any experiences with this, good and bad. Please leave a comment if you give it a try.

Tableau Server - Factors Affecting What Users Can Do

I encountered this discussion in the Tableau Community recently: Reporting on Permissions for Server Projects in which the participants are trying to figure out how to create custom admin views to see who can view which Projects. Like many of these discussions it ranges out from its initial focus to contemplate broader Permissions questions.

Rather than trying to cover everything to do with permissions in this post, mostly because it's really complex, convoluted and difficult, almost impossible to come up with a succinct description, I'm going to use this opportunity to post to a diagram mapping the Tableau Server landscape identifying the elements that affect who can see what and what they can do with what they can see.

The information is accurate and complete, as far as I've been able to get it, with the notable exception that it doesn't include Web Edit capabilities. If and when anyone finds any deficiencies—inaccuracies, missing elements, something that's not clear, etc., please leave a comment and I'll correct the map.

The following address some of the points in the discussion noted above, along with others worth noting. I'll keep adding to them as time goes by, depending upon time, best intentions, inclination, other interesting things coming up, etc. I'll also incorporate useful points provided in the post's comments, along with attribution, so if you're add anything and want credit please identify yourself (anonymous doesn't get nearly the credit he/she deserves).

And not in a good way.

Although Tableau's approach to providing ways to control access to and interaction with objects and contents uses terms that are familiar, it's very much its own animal.
The surface similarities lend an aura of familiarity that leads to expectations of how it's going to work, and consequently approaches to working with and managing objects, content, and the Users' interactions, that aren't in line with Tableau's reality. And this causes very substantial cognitive conflicts that can be difficult to recognize, much less overcome.

Learning about Tableau's Permissions and how they work is hard.
Internalizing this knowledge is harder still.

Don't be worried or discouraged if working with Permissions isn't smooth and easy out of the gate. For most of us it's a struggle to absorb things to the point of being reasonably comfortable with predicting how things will work and puzzling out why they're not working the way we think they should.
Don't give up. You still have us.

, not users or groups.

Permissions are attached to Projects, Workbooks, Views, and Data Sources.
Permissions connect Users and Groups to these content objects.
There's a tendency to think of Permissions being assigned to Users or Groups, this can lead to difficulty in interpreting how Permissions work and figuring out why things aren't working the way one thinks they should.

Permissions aren't the only thing controlling what users can see and do.
License levels, admin status, publishing right granted or not, content ownership, site membership, group membership, individual identity, and whether a workbook is published with tabs showing all get involved.

Any Permission that is not explicitly granted to a user somewhere, somehow is effectively denied.

Inherited is a horribly bad word as it's used in the documentation and Tableau Server UI. It implies that there is an active process that assigns something. While there is, in a very narrow technical sense something that -could- be called inheritance in Tableau Server it's not what people who don't already know it think of inheritance being, and in this it misleads almost everyone who needs to know what's going on (and this sentence is far less confusing than inheritance).

Anyone who has access to the object and is permitted to do so can change the object's Permissions. This is an extremely powerful ability and makes effectively administering Tableau Server possible.
However, it takes experience and skill to manage Permissions well—it's really easy to make a real hash of things, so be careful and test afterwards.

No real surprise here, admins can do anything with anything, so it's best to make sure your admins understand the consequences of what they're doing. Most don't.

Whomever published something is its owner by default, and can do whatever they want with it. Subject to the permissions of other objects that may be involved, an Owner can't move a Workbook into a Project for which they don't have the proper Permissions.
(exercise for the reader: what Permission lets someone publish or move a Workbook into a Project?)
Ownership is a frequently overlook property. The owner of a thing can change its Permissions, which can lead to confusion.
Ownership can be transferred, and this can really throw spanners into the works.

The number of things that can be involved is large, and their interactions can be really hard to untangle. There's a process I go through, but it's not really a recipe I can write down, more like an exploration of a jungle when there's lots of potential dangers lurking in the understory waiting to trip you up.
OK, it's not that mysterious - I essentially work through the map identifying what's involved until I get to the solution point.

From what I've seen so far Tableau Server 9's Permissions monitoring and management abilities and clarity and ease of use has improved leaps and bounds. It's very different from previous approaches.
I haven't really had the chance to dig into it yet, but will and hope to be delighted.